In the last couple of months, the world of Instagram has been filled with rumors about how Instagram’s algorithm is decreasing the reach of certain posts for certain profiles. Have you also noticed a drop of engagement in the last few months but don’t know why? Perhaps you’re a victim of an emergence that’s been the main topic among the most fervent Instagramers.

What is a shadow ban?

Shadow ban is Instagram’s measure that punishes users who are in any way violating their terms and conditions. The term first appeared a couple of months ago on the social media Twitter, which used this technique to temporarily punish people posting offensive or inappropriate content. A user is not informed about this measure in advance and is not even aware of it – the only indication is the drastically decreased reach of their posts.

On the other hand, Instagram’s shadow ban hides the users’ posts under the hashtag that was used in the post. In practice, this means that the users who are not yet following an account can’t find the photograph of that account among the last or top posts.

How can you find out if you’re a victim of a shadow ban?

The quickest way to find out is to ask an Instagram user to temporarily stop following you. Then, they should go through the hashtags you’ve used in your photo and check whether they can find you among them.

Seeing how you’re reading this article, we can assume that you’ve already heard of the shadow ban and are worried that Instagram will also punish you with a reduced reach. Keep on reading; we will explain what triggers the shadow ban in the first place. So don’t panic – it can happen to anyone!

What triggers a shadow ban?

1. Using bots and automation. We know that using bots to post your photos, leave comments and press likes seems like a great opportunity to gain a high number of followers in a short amount of time, but bots are strictly forbidden by Instagram. By using automation you’re breaking Instagram’s basic terms and conditions, so the algorithm will punish you accordingly.

2. Using forbidden hashtags. Besides the obviously forbidden hashtags (violence, nudity, etc.), the black list also contains hashtags with seemingly completely innocent words. We’re convinced that using them can happen to anyone at one point. A certain hashtag is banned when a few users post inappropriate photos and use that hashtag. When those photos are reported, Instagram temporarily suspends that hashtag. We’d advise you to make sure a certain hashtag isn’t on the black list before using it. You can check this by looking over the posts shown beneath it. If a hashtag is forbidden, it will show a message that all posts are currently hidden (see the image below). An example of completely “innocent” hashtags that are temporarily forbidden: 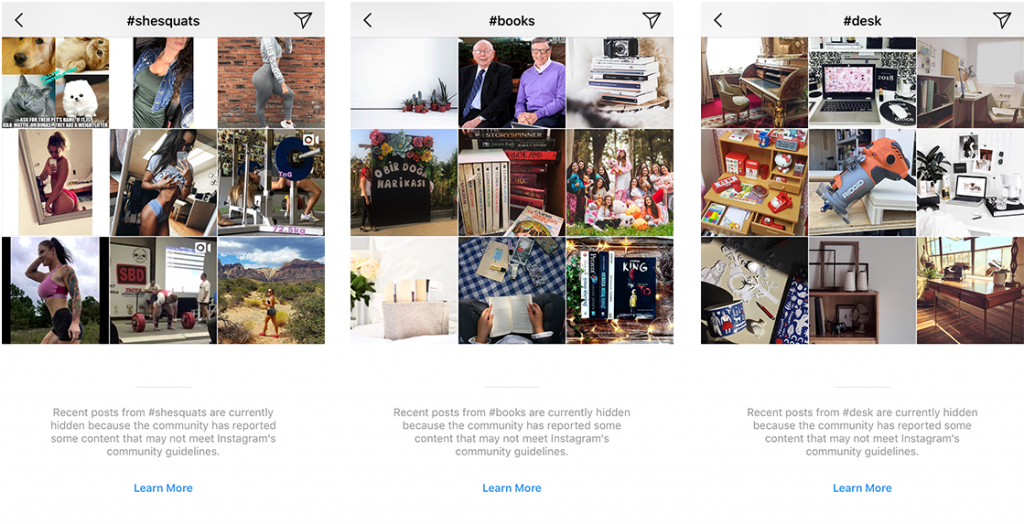 3. Sudden increase in activity. Here, we’re talking about liking a large amount of photos or following multiple new accounts in a short period of time. With the majority of Instagram accounts, the approximate upper limit is liking 150 photos and following 50 new accounts in one hour. Any kind of behavior that surpasses those numbers is seen by the Instagram algorithm as spam or the working of bots and other types of automation. This is, as previously stated, highly forbidden.

4. Frequent use of the same hashtags or their misuse. Using the same hashtags over and over again could also be seen as spam by Instagram’s algorithm. Using different hashtags makes the posts appear more authentic and human, while at the same time reaching a wider group of people since individual hashtags will reach different niches. If you get shadow banned due to hashtag misuse (a too frequent use), we suggest you try with a post with a lower number of hashtags (0–10). Despite the fact that hashtags are a tool with which you can reach new followers, Instagram issued a formal statement, claiming that users should focus more on the content and not so much on the hashtag strategy. If you post your hashtags partly in the comment and partly in the description, make sure you don’t use more than 30, which is the allowed limit (if you edit the comment later, you can add another 30, but this is strictly forbidden).

My photo isn’t among the hashtags – now what?

Don’t panic. Shadow ban always applies to individual photos and not the entire Instagram account. We would advise you to check whether you lately made any of the above mentioned mistakes. If you happen to be shadow banned, we recommend that you decrease the amount of your daily Instagram activities for a day or two and then continue as usual – without the forbidden activities, of course.

Instagram has repeatedly emphasized that it is a social network where the human factor is of major importance. In your Instagram strategy you should first focus on quality content and then devote yourselves to hashtags. Your captions beneath the photo should be diverse and not repetitive; don’t forget, your followers want stories and some photos also require an explanation. The statistics of the platform also show that users react better to interesting captions so those posts always get more engagement. After all, the end game of this platform is an always improving user experience.

Need extra help in managing your Instagram account? We would love to get to know you over a cup of coffee! :)

SEO Case Study: To the Top of Search Results with Donat